Thanksgiving weekend and we are still using live shrimp to catch beautiful speckled trout. This weekend I had two fishing charters with both groups being from the New Orleans area.

The first group I had was a nurse practitioner from the VA hospital and his two small sons. His sons have never been fishing before and I can tell you that they had a fantastic time. I picked them up from the log cabins at safe light Friday morning and we headed south towards Barataria Bay with a slight breeze out of the northeast at about eight miles per hour. The ride out in the morning was stunning. We saw lots of marine life as well as wildlife early in the morning coming to life. The sun rise was a sight to see Friday morning during the ride out to the first fishing spot. Upon arriving at the first spot we moved into position with the sun to our backs anchored down and immediately started catching some very nice speckled trout. The bite was not on fire however it was steady, and the trout was running between fifteen and seventeen-inch fish. With two small boys on the boat that could not throw a line or bait the hook with live shrimp, I took one of them on the bow with me and their father took the other on the back of the boat with him. We started working with the two boys showing them how to cast a line, take the slack out of the line, set the hook and finally how to land a trout when you get him to the boat. We manage to box up fifty speckled trout but keep in mind we were working with two young boys that had never fished before. I would say that was a fantastic day on the water and we made great progress showing them boys how it is done. I was telling the father after the trip that we could have worked a little harder and ran the number of fish up a little higher, but we would have missed out on the opportunity to show those young boys how to put fish in the boat. I can promise you they will remember that fishing trip for the rest of there lives. Upon arriving back at the cabins after the fishing trip I dropped them off at their cabin and came over to my place to start cleaning the fish. They came over to take some pictures before the fish cleaning began. It was very nice of the dad to help me clean the fish. As we were cleaning the trout the boys were feeding the scraps to the diverse types of water fowl that was hanging around the dock. We had some brown pelicans, a blue heron and a couple of white herons and of course a bunch of sea gulls. I think the boys had more fun feeding the birds than they had catching the speckled trout.

Well Saturday morning was even better than Friday morning regarding the wind. The ride out Saturday morning was picture perfect. There was not a ripple on the water. I had the pleasure of fishing four people form the New Orleans area all four were business owners and they needed a break from the busy schedule they have. It was a beautiful ride out in the morning as again we were able to see diverse types of wildlife and marine life waking up during our ride out. Upon arriving at the first spot where we caught most of the speckled trout the day before, I found there was not much of a tide movement. We must have caught it just right during a tide change. We were not catching much at first however once the tide started falling with a little momentum the bite turned on more and more. All fore of the clients new how to fish and the battle was on. They were bringing the fish over the side of the boat one after the other. I could hardly keep up with taking the trout off their line and bating the hooks with a new live shrimp. I must say they did an excellent job working with me when I was on the back of the boat working somebodies fish the guys on the bow were taking care of their selves. Again, when I was on the bow taking care of their fish the fellows on the back of the boat were doing everything for themselves. What an enjoyable day on the water with that group. Laughing, cutting up and catching speckled trout all morning long made for a fantastic fishing trip. We rapped things up about ten o’clock and started heading back to the cabins with a full box of fish. We ended up with several red fish and black drums as well as a full box of beautiful speckled trout. Good thing when we got back to the cabins and I dropped them off they didn’t take long to find their way over to my place to start helping me clean the fish. We left the red fish on the half shell and prepared the speckled trout for frying. The drum fish were cleaned in such a way that their mother was going to make a special backed dish that they were telling me about. She has this recipe for blacken drum fish that is out of this world. Still catching all fish three feet under a popping cork using live shrimp for bait. Not sure how long the shrimp will stay in on us, but if they do I will continue to use live shrimp for all my trips. What a great end to a fantastic weekend of fishing. Everyone had a wonderful time and most of all a lot of great memories were built over the course of this weekend. Remember I always say that catching fish is one thing, but building memories with family and friends is what it is all about. 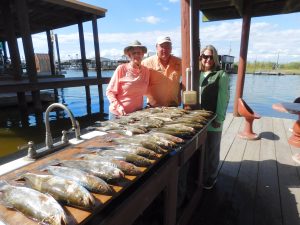