Today I had the pleasure of fishing with Seb and his wife Lisa. I picked them up from the cabins around five fifteen in the late afternoon and headed south across Barataria Bay in search of some speckled trout and bull reds. We hadn’t made it all the way out to the barrier islands and we decided to stop at one of the sunken islands I know about and boy I am glade we did. Lisa wanted to feel what it felt like to catch a thirty five pound bull red and after two of the big boys broke off her line during the fight she finally manage to wear one down enough to net it and take a couple of photos before returning him back to the water to fight another day. I must say she was sweating pretty good by the time she got him to the boat and was ready to get him in the boat so she could take a break. Her husband Seb boated one right after her and he was about the same size as Lisa’s and put up a good fight as well. At this time we had about ten speckled trout on ice and decided to move the boat a little closer to the barrier islands to find some nice speckled trout. After a short ten minuet ride we pulled up on a oyster reef I been catching some nice trout on all summer and the first two cast they made were good for two nice speckled trout. We ended up with twenty two for the evening and it was getting close to dark and we had to leave the islands in order to get home before dark. Seb and Lisa were kind enough to help me clean the speckled trout and they went straight to the log cabins and cooked them up for dinner. Believe me when I say you can’t get speckled trout any fresher than that. Catching dinner was great however building the memories with Seb and his wife Lisa was far greater. We took lot’s of photos and I am sure they will have something to talk about with there friends for quite some time. 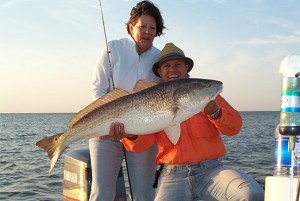