Speckled trout limits are being caught right now five minuets from the log cabins. That’s right you won’t have to burn two gallons of gas to get to the strike zone for the trout. The last few days we had a fantastic group of police officers and there wife’s from Memphis Tn and I must tell you I mean fantastic people. They fished two full days and did one day in the city looking around and satisfying the women with a lot of window shopping. They caught plenty of nice speckled trout early in the morning and then retired back to the duck ponds and broken marsh to fish for red fish. They always took a break in the middle of the day and then was back at it around three o’clock until dark. Mostly fishing red in the evening as the trout bite is not as good in the latter part of the day like it is in the morning. The wind has calmed down from the cool front we had and the water clarity has come back very good. That is why the trout has starting feeding two days after the cool front. Once the water cleans up the trout will start feeding and will continue to feed until the next cool front hits. Remember in the fall fishing season it is the same feeding habits between every cool front. The speckled trout will feed all the way up to the day the cool front hits and then once the cool front comes through they will go to a deep hole somewhere and just sit there for two or three days until the water comes back in and cleans up. Then they will eat like crazy until the next cool front. The closer you get to the next cool front the more they seem to feed. 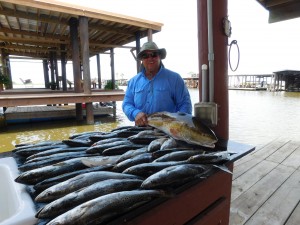