Speckled trout fishing on the south side of Barataria Bay during the middle of the summer is the hot place to fish trout during the summer. We are catching some beautiful speckled trout right now on the oyster reefs on the inside of the barrier islands near four bayou pass. Fishing live shrimp three feet under a popping cork seems to be the best way to fish right now. It is the hottest part of the summer so you have to get out there early in the morning because I find the bite is from safe light until around eight o’clock. After eight o’clock in the morning it seems you are just riding around getting a sun tan. We have been catching some nice trout also in the early afternoon as the tide is changing around. We have a little over a foot of range right now and it is changing at around three in the afternoon. As soon as the tide turns around the speckled trout have been biting for the first two hours of the new tide direction. The morning trips are a little better because of the hot temperature lately as that afternoon bite is very hot. The folks we been taking has been having a great time catching trout in the shallow water on the reefs where there is a lot of feed during this time of the year. Catching trout in the shallow water is a extra treat because they can’t go down once they are hook because it is only three feet deep and you can see all the action as you are reeling the fish to the boat. The bull reds are starting to show up along the barrier islands as we been catching quite a few of them lately. They are so much fun to catch and boy do they put on a fight. Once we get them in the boat we have time to take a quick photo with them and then slip them back into the water so they can live to fight another day. If you never caught one before I can assure you, it will be the fight of your life. 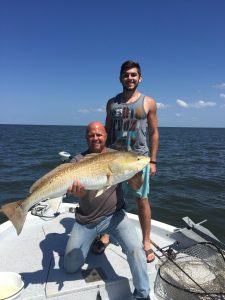