Speckled Trout Fishing Charters Here At Bayou Log Cabins Fishing Lodge: This weekend we had a group in from Tulsa Oklahoma and what a group it was. We had three days of fishing and with a stiff wind out of the southeast at twenty to twenty five all weekend. Now that will make a true fisherman out of you if you can catch speckled trout under those conditions. We left the log cabins Friday morning at safe light and headed south towards Barataria Bay and when we got to the outskirts of the open water we were greeted with two and a half to three foot waves. Never the less we continued across the open water and were able to slip in behind some broken islands in a area called Basa Basa. The guys fished hard while I had to move the boat several times keeping it in protected waters we were able to box up enough speckled trout to feed twelve guys that night. Saturday morning we were wishing for better conditions but needless to say I think it was just a little bit worse. Well the same thing we took a beaten going across Barataria Bay but once on the other side we were able to find some calmer water. The color was still not what you would call good but again we were able to box up some pretty trout. The guys had a great time on the water catching the few speckled trout that we did so at the end of the day I would call it a good fishing trip. As I always say sometimes we go out and catch a box of speckled trout in a hour and a half and other times we fish until eleven o’clock in the day and end up with just enough to eat dinner that night. The most important thing to keep in mind is what kind of time did the folks have while on the fishing trip. That is what we focus on while on the water with a group of customers because at the end of the day that is what matters. If you spend enough time on the water you will experience both ends of the spectrum. You will catch your limit by seven thirty in the morning on some days and other days you might have caught just enough for dinner by twelve o’clock noon. It’s not that we as charter guides do anything different, it’s just the nature of fishing. I believe if you caught your limit every time you left the camp and by that eliminating the challenge you would take all the fun out of the sport of fishing. 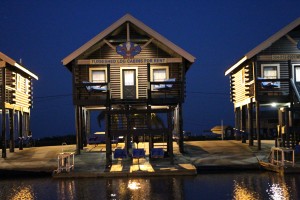