Speckled Trout Are Feeding In The Shallow Lakes: I had a trip yesterday and Wow the bite was on. As I said before, this is the time of the year you want to fish in between the cool fronts. You want to wait at least two to three days after a cool front when the tide comes back in and the water cleans up. This is when the speckled trout and red fish normally will start feeding again all the way up to the next cool front. Yesterday the wind was laid down and the water was very clear and the speckled trout was feeding early in the morning in the shallow lakes here close to Lake Hermitage. This time of the year it is getting hard to find live shrimp so I swapped over to plastics about 3 weeks ago. The speckle trout bite yesterday was as fast as the bait hit the water. The girls fished under a cork and the guys did a cast and retrieve. We caught both speckled trout and red fish until we limited out. The thing about fishing this area this time of the year is that you do not have to go out to the barrier islands to find the fish. Remember in the fall of the year is when the egg sacks dry up and they transition in to the shallow lakes and pipeline canals until sometime in February. The bait of choice this time of the year is a gig head and a purple and green soft tail both under a cork as well as doing a cast and retrieve. The best time of the day to fish is early in the morning or late in the evening or if you have change of tide in the middle of the day. 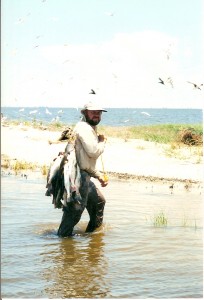 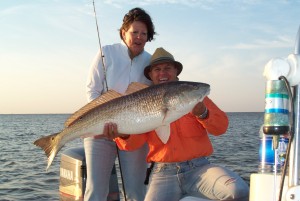