Today I had to pleasure of fishing with a group from Los Angles Ca. that was filming a movie. I picked them up from the cabins at safe light and headed south across Barataria Bay towards the barrier islands. We normally do not have to go out that far this time of the year however we have been catching some nice speckled trout out there on the oyster reefs and I just wanted them to have a good time while filming there movie. The wind was out of the north at about fifteen miles a hour so we had about a two foot chop and the water was a little stained. The fish were hungry and we had a boat load of live shrimp to feed them. It took a little while for the auto folks to mic everyone up but once we were all done with that the guys went to work catching fish. We were catching trout one after the other just about as fast as you could throw the line. Well that is they were getting bites as fast as the cork hit the water but I would say about sixty percent of the those strikes a trout would hit the ice chest. After a good number of trout were on ice the bull reds moved in on us and that was a whole different story in regards to putting fish in the boat one after another. It takes a little longer to boat one of those bull reds then it does a speckled tout. They were able to get plenty of footage for the show they were filming and had a great time while doing so. We headed back across the bay going a little slower then going out because we were bucking the north wind head on. When we arrived at the camp the guys were nice enough to help me clean the fish, wash them, bag them and ice them down in there ice chest. Now that is what I call a perfect fishing charter. Had a great time guys and I look forward to our next trip. 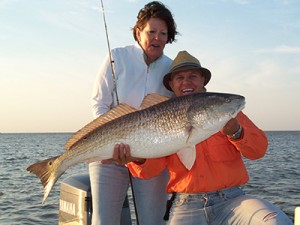