Who would believe we are catching limits of speckled trout this early in the spring. The live shrimp have moved in the area and the speckled trout are following the feed into the barrier islands on top of the oyster reefs. Had two trips this week and I must say that the amount of trout that are in on us right now is amazing not to mention the size of trout we are catching. The live shrimp that has moved in to the region has a lot to do with the amount of fish that has showed up along the barrier islands. Everything is happening about a month early this year. The water temperature has warmed as well as the feed has showed up and that is the two main things that has to happen for the trout to start showing up.

I had two couples on my boat Sunday morning for a day of fun catching some beautiful fish. I picked them up from the cabins at safe light and headed south across Barataria Bay towards the barrier islands. The lake was like glass with a slight breeze out of the southwest at about five miles per hour. The temperature was around sixty nine and it was just a beautiful morning. I had a good feeling about the day based on the amount of fish we been catching around the area. We stopped at the first spot and they went to work right a way putting some beautiful speckled trout in the boat. Before we knew it the baskets were filling up and the girls were having a fantastic time. You don’t realize how fast you can catch one hundred trout when you are involved in the process, however when you are catching them as soon as the cork hit the water it doesn’t take very long at all. It was about eight thirty in the morning when I did a fish count and we were six trout short of a one hundred trout limit. Well the last six trout that came in the boat was given to the two wife’s. The men put there poles down and took a few photos of the girls pulling in the last six trout. We don’t hit them perfect every time like this but is sure is nice when we do. I love putting folks on a non stop bite of trout like we had Sunday morning. We finished up the limit and headed over to the Grand Isle Marine for a early morning sandwich. We all tried a fried shrimp po-boy and it was the best shrimp po-boy they had ever had. After that great meal we got in the boat and headed back across Barataria Bay towards the log cabins. I dropped them off at the cabins and started cleaning the fish we had caught. After washing and bagging the fish up I iced them down in there ice chest for the ride home. They all took showers while I was cleaning the fish so when they came down stairs it was time to get on the road for a long trip back home. What a perfect day on the water, caught a bunch of fish, took a lot of photos and built a lot of memories that will last a life time. It doesn’t always work out that perfect but it sure feels good when it does. Watching folks catch a box of speckled trout and have fun building memories is truly what it is all about.

The second charter I had was on Tuesday and it was not as good as the Sunday trip. I had four guys in from Houston Texas and they were some great guys to fish with. The conditions were not as good as the Sunday trip. Again I picked them up from the cabins at safe light about five forty five in the morning and we headed south back across Barataria Bay towards the spot where we been catching our fish. The conditions were quite different Tuesday morning, with a stiff wind out of the north west at about twenty miles per hour. We decided to give it a try anyway because of the good trips I’ve been having out there. Well when we arrived you could tell the difference in the clarity of the water. The surf was pounding with three foot waves and the tide was coming in and all the sand that was being disturbed from the beach was coming in right over the oyster reefs we were fishing on. Well as you already know when the water becomes that dirty the speckled trout will leave the shallow waters and head for deeper water. They do not like to swim around and feed in dirty water. We moved the boat around a few times to find some cleaner water but didn’t have any luck. We decided to head back across Barataria Bay to the shallow duck ponds and pipe line canals to look for some red fish. Well we manage to get out the wind in some small duck ponds and that payed off for us very well. The guys manage to box up fifteen beautiful red fish and that saved the day. Fighting those red fish in the shallow duck ponds is a lot of action. The red fish cannot go down once they are hooked because we are fishing in only two feet of water. All the action is on top of the water and you can see the entire fight all the way to the boat. I believer those guys had as much fun catching those fifteen red fish as if we would have caught one hundred speckled trout out by the barrier islands. 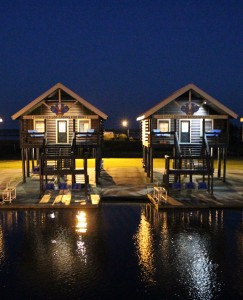 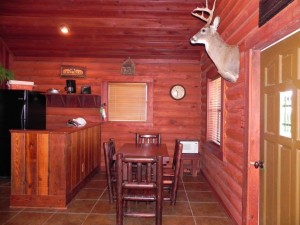