September Speckle Trout Fishing: This is the time of the year that the speckle trout are getting together out by the barrier islands to start the transition inland to the interior bays, shallow lakes, duck ponds and dead end pipe line canals for the fall fishing season. Now that we had a first cool front and the water temperature is just starting to change the speckle trout know what time of the year it is and the egg sacks began to dry up. Sometime towards of the end of the September they will transition in for a three month fall season.

Fall Speckle Trout Fishing Is Just Beginning: I call the fall speckle trout season ” Picking Low Hanging Fruit” because the all the big females have moved in close to the village for the next three months. All the shrimp are just about gone out the the gulf and the food source is limited. This is the time of the year we swap over from using live shrimp to artificial bait. We don’t have to travel far to get into a awesome bite. The thick is to fish the approaching cool fronts. They will come through this time of the year ever seven to ten days. Never fish for speckle trout twenty fore to forty eight hours after a cool front.

Bull Red Fishing Out By The Barrier Islands: Wow what a great time of the year to put folks on some of the biggest red fish in north america. The adult bull reds are spooning now near the barrier islands and they are there by the hundreds. What a great fight it is to land a 35 to 40 pound bull red on light tackle. You will be proud to take photos of that bull red for bragging rights. 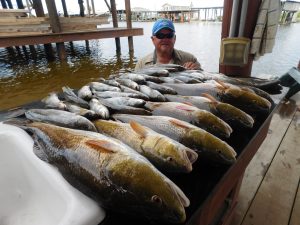 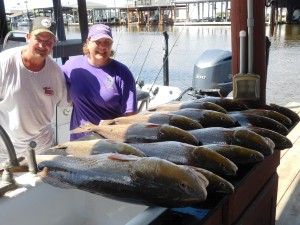