Today I had the pleasure of fishing with a group out of North Louisiana. I picked them up from the log cabins at safe light and headed south towards Barataria Bay. With the water temperature cooling off a little we decided to stay on this side of the bay and not cross over to the barrier islands. The wind was calm and the water clarity was great. The trout were feeding in the shallow bays and the shrimp were all over the top of the water. With all that activity going on you know the sea gulls were having there way with a fantastic breakfast. As usually the trout were small under the birds however we found a small island that had a good tide rolling around the edges of it and the bigger trout were feeding around both sides of the island. We were catching some nice trout one after another when the bull reds moved in on us and before we knew it we had a double going on with two big bull reds. Well that was a sight to see as the two guys were swapping places from the front of the boat to the back of the boat trying to not tangle the lines with the two big reds on the other end. They finally got the reds in and we done a quick photo section and through them back over so they could fight another day. We ended up with a nice box of speckled trout and six bull reds. When we arrived back at the cabins I cleaned them while they cleaned up and pack the truck up for the ride home. As I say all the time catching fish is just something we do while the real important thing that is happening is you and your group are building memories that will last a life time. 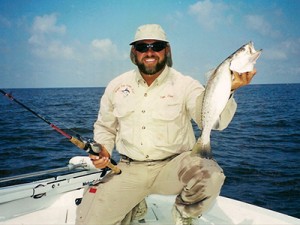